When Elaine asked me on Wednesday what we could do for her daughter’s “Heart Healthy Valentine’s Day Party” at school, I got to work, searching on the web for some new twist on an old idea.

Somehow I came across the idea to incorporate black beans into brownies. Finding this idea a compelling one, I found several involved recipes, reading reviews and comments as I searched … until I came across a comment from one person who suggested just using a whole can of black beans and a box of brownie mix and that was it.

Now, I have to say, I know of a similar recipe, with a similar substitution – mixing a whole can of pureed pumpkin with a standard box of golden cake mix – and knowing from experience … this recipe is amazing (and easy and certainly trims the fat content).

Armed with a can of black beans and a box of brownie mix, I followed the recipe, step by step … modifying the recipe only slightly by draining the beans completely before dumping them in the blender and adding about ½ cup of water before setting it on “puree”.  Lastly, I incorporated the fiber-rich beans with brownie mix, poured it into my pan and baked!

And it worked, my house smelled like brownies, my kids ate them like brownies … then I brought the balance over to Elaine’s where the remainder, were tried and tested by another three kids and one suspicious husband! 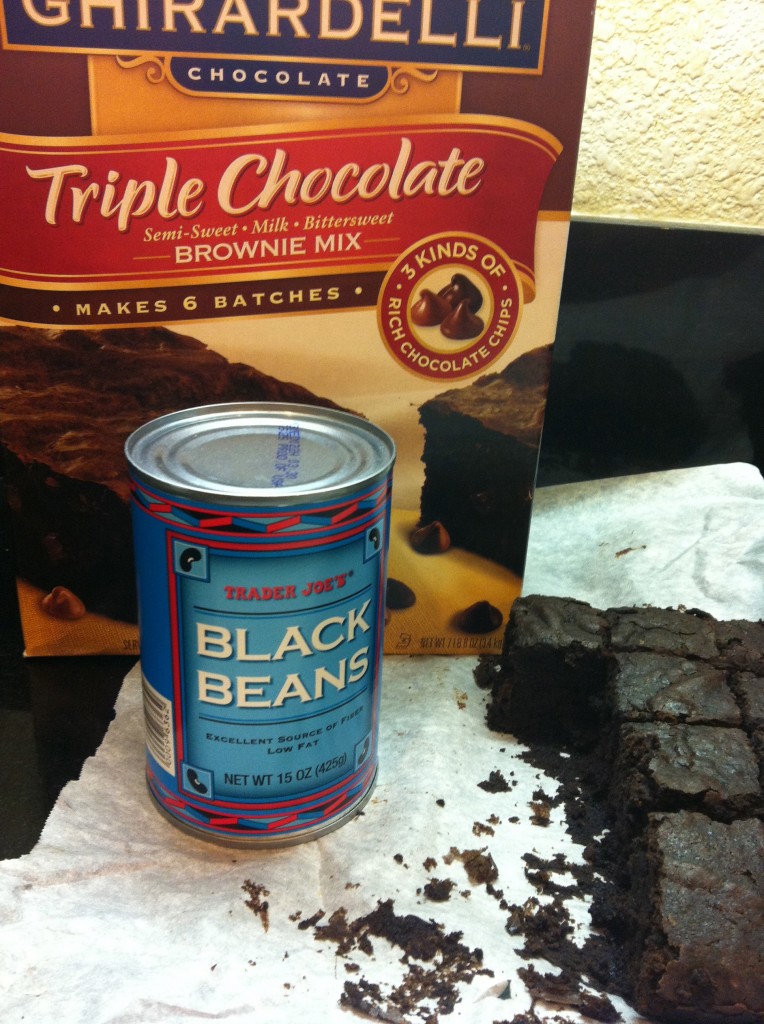 I have to say, I would make them again … so there’s something to be said for opposites attract! Try it, trust us, your family might be foiled, but they won’t be lacking!

And after many years of making this Passover treat, we think you might agree that there’s nothing like (or wrong) with covering matzos with browned butter and sugar to make a caramelized sauce and then, as if that wasn’t enough, adding dark chocolate chips to melt and spread upon them. Here’s the basics of what we did:

… if you can wait that long! If there’s one thing we learned about these matzos, it’s impossible to eat just one piece, in fact, the recipe is so easy to follow, we always make double batches (some for what we like to call, “home consumption”) and some for our Seders and snacks during Passover. Enjoy!

Now, we don’t know about you, but we know you pretty well enough to know that you know as well as we do, that those wonderful product and marketing people over at Trader Joe’s will pretty much cover ANYTHING in chocolate!

And therefore, we also know we don’t have to tell you, they don’t use just so-so chocolate, no … they use the good stuff … and it is … oh, so good! And so while we made Chocolate Matzo Bark today in preparation for our seders … AND of course, in the spirit of cleaning out the cupboards, expunging our pantries of chametz (products containing leavened flour) – we were left with no choice – but to enjoy one of our newest Trader Joe’s obsessions … that last, lone bag of Dark Chocolate Covered Pretzel Slims. 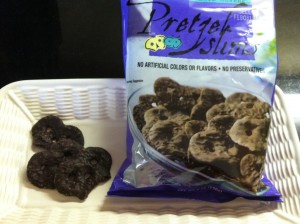 Yes, these little treats are the yin to the yang of our taste buds – perfectly salty and sweet and decadent in every bite – no, those Trader Joe’s product development geniuses really don’t fool around, and neither do we when it comes to recommending good quality, unable-to-stop-yourself-from-having-just-one-more … treats!

So the moral of this little blog post remains: run, don’t walk, but run to your local Trader Joe’s and buy a bag or two (or five), just be sure, that if you’re Jewish, you eat them all before Friday (and trust us, you will)!